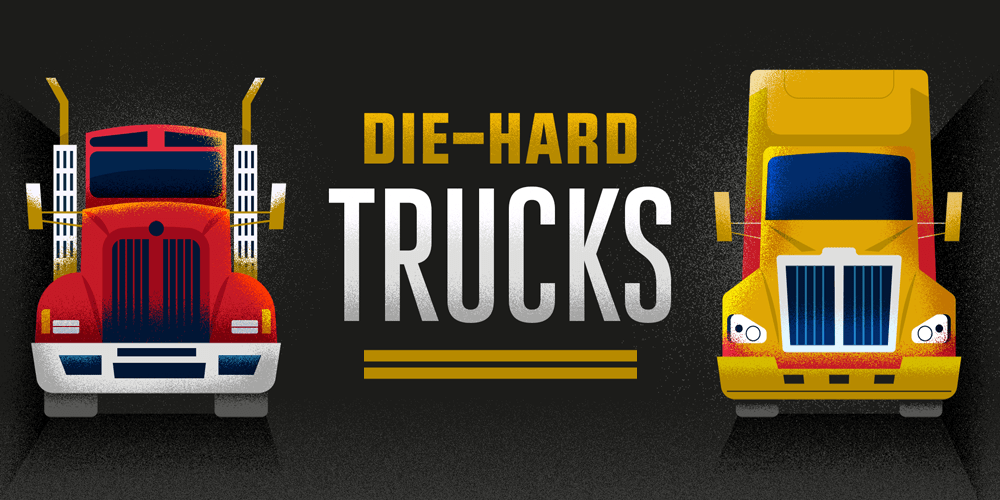 Automobile design and technology has sure come a long way since the first truck hit the roads over 100 years ago. Each truck has its own fascinating design story, so we found six of the longest-living trucks and traced each vehicle’s origins from the first generation all the way to the latest model.

We discovered a couple of big surprises along the way; read on to see which truck started life as a tractor, and which ones have made the biggest design leaps since their inception. 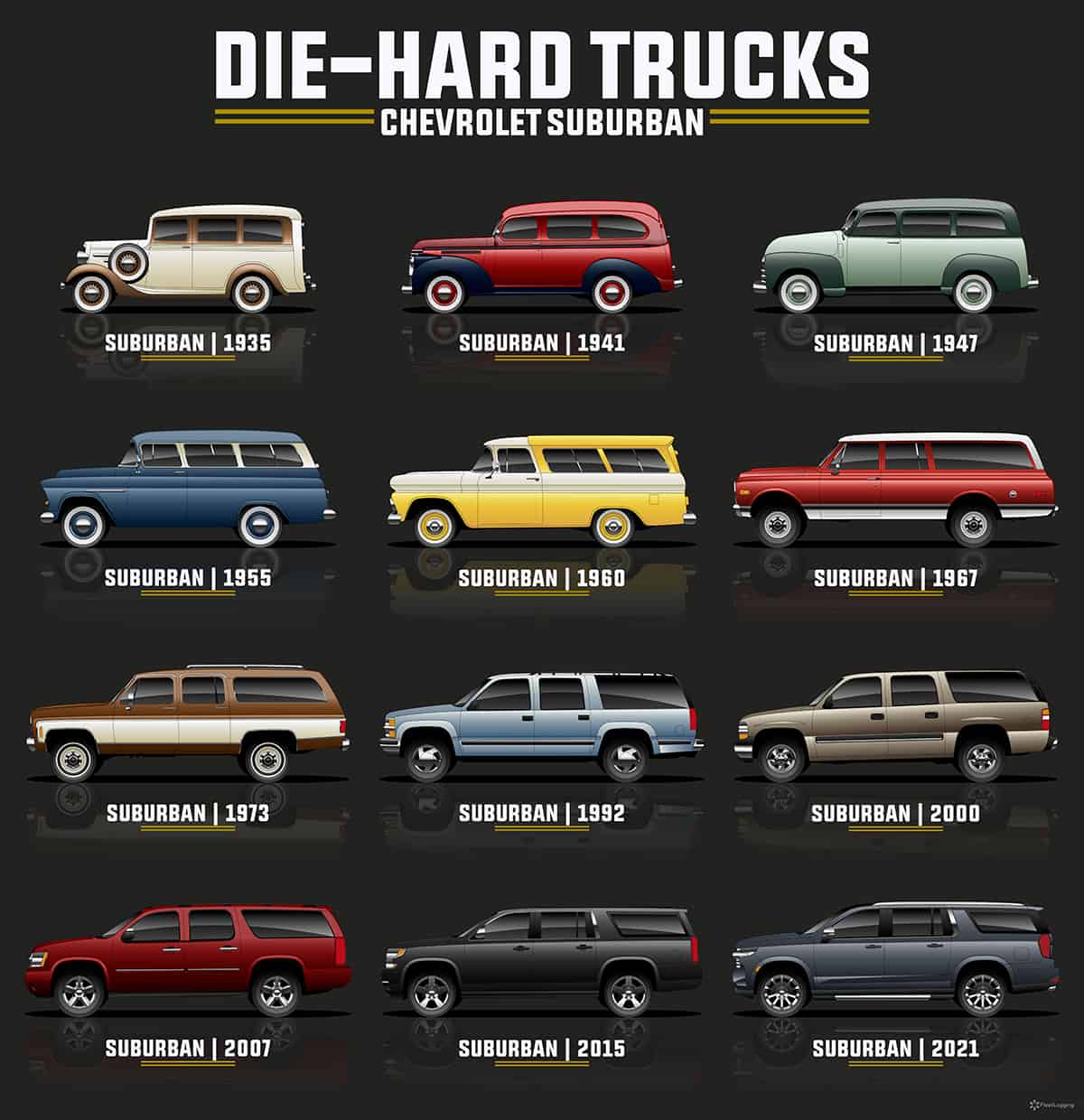 See the evolution of the Chevrolet Suburban (Front view)

The current twelfth-gen Chevy Suburban remains the half-ton SUV that, for generations, has remained a bestseller for General Motors. However, the SUV version we’ve known didn’t start life as an SUV. The first-gen Suburban is a station wagon and is known as the Carryall Suburban. It seated up to eight people in a 3-2-3 configuration and came with either side-hinged rear-panel doors or a rear tailgate.

The Suburban eventually started shedding its vintage design in favor of squared haunches and a larger hood, and it did it while retaining the old-school round headlamps. The rounded body profiles began in the ninth-gen model while the sculpted look was evident on the eleventh-gen model. For 2021, the twelfth-gen Chevy Suburban has a modern design with sharper edges, while retaining its bold stance. 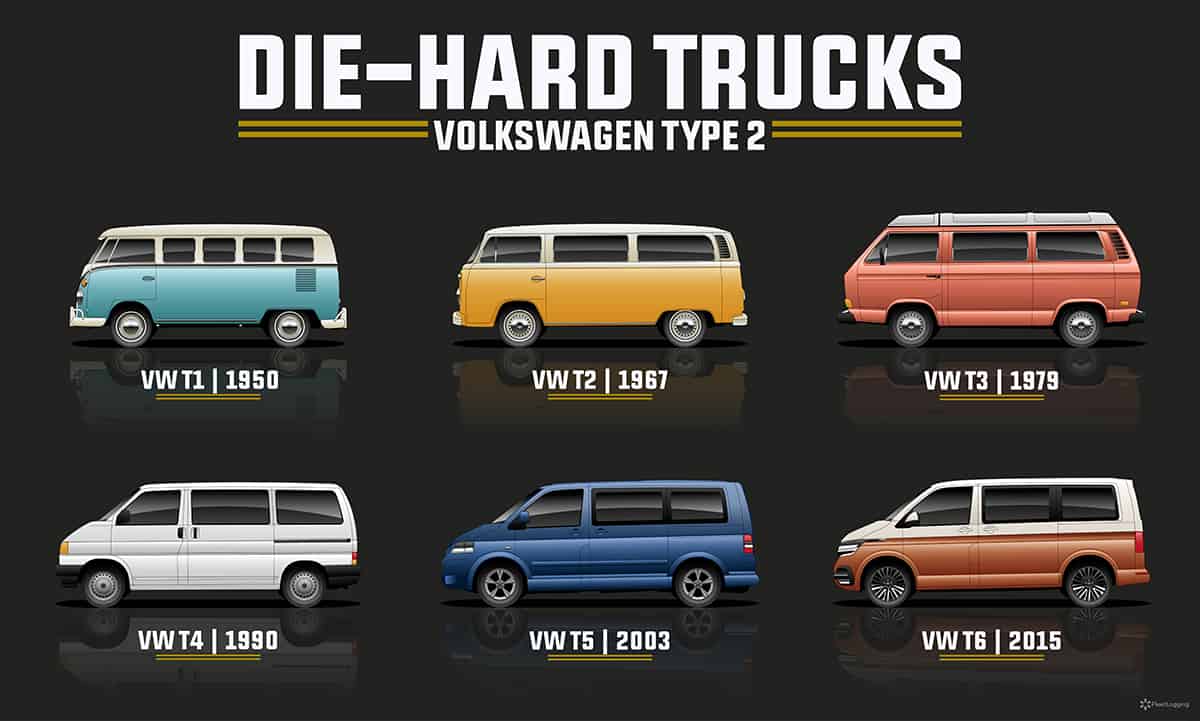 See the evolution of the VW Type 2 (Front view)

The Volkswagen Type 2 is known by many names. From Kombi, Microbus, Camper Van, or Transporter, the VW Type 2 remains an iconic name in the world of vans and commercial pickup trucks. From the first-gen T1 model introduced in 1950 to the third-gen version appearing in 1979, all Type models were closely related to the Beetle’s platform. All of this came to an end with the T4 model of 1990, which had a longer nose courtesy of a water-cooled engine under the hood.

The fifth-gen VW Type 2 T5 model entered the market in 2003. It came with a more rounded profile, a taller windshield design, and a smaller hood. The current T6 is still based on T5 underpinnings, but it now has a modernized fascia with darker lighting elements. 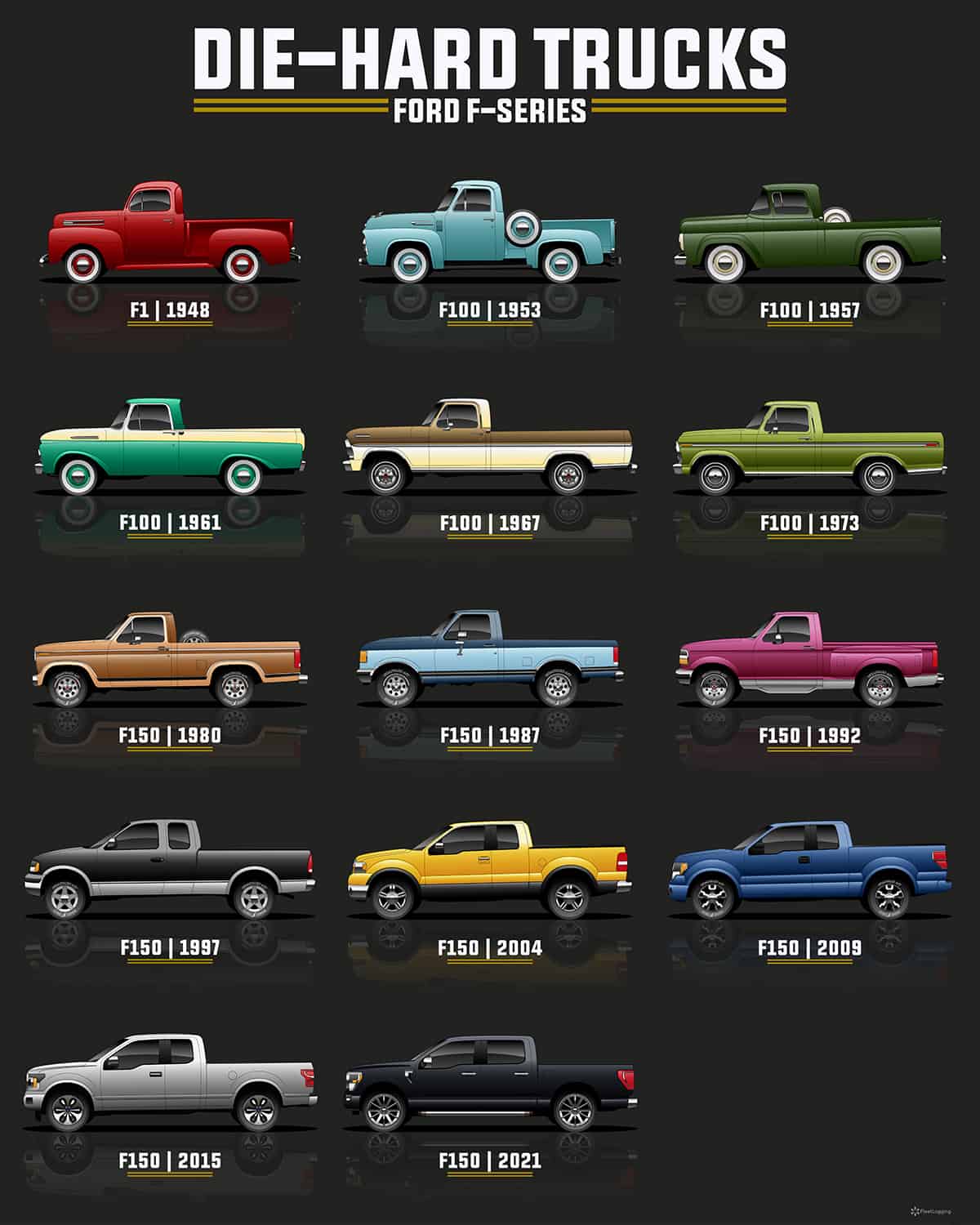 See the evolution of the Ford F Series (Front view)

Unlike the Chevy Suburban, the Ford F-150 started life as an actual truck. The F-Series remains the bestselling vehicle in the USA and has generated massive revenue for Ford since entering the market in 1948. Hot-rod builders love the second-gen model with its wraparound windshield design and vertical pillars, but the clamshell hood design made an entrance in 1957 with the third-gen F-150.

The Ford F-150 grew a larger and wider body in 1967, but the square headlights came later in the sixth-gen model. The familiar F-150 stance is evident in the seventh-gen model, while the truck gained a new face and body in 1997 for the tenth-gen model. The current 2021 Ford F-150 has a lower shoulder line and a new grille, but it remains one of the best-looking half-ton pickups in the business. 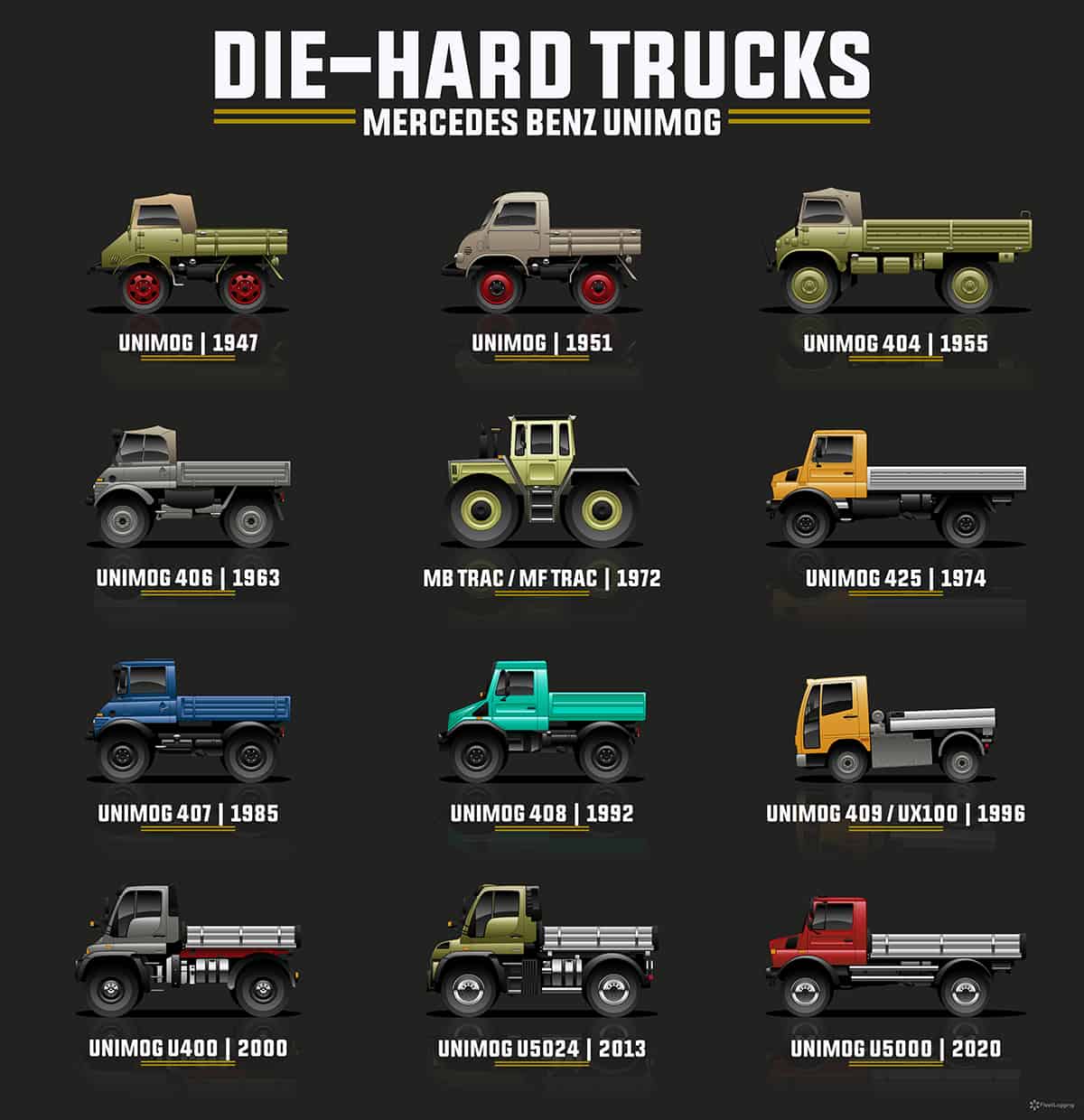 See the evolution of the Unimog (Front view)

We know the Mercedes-Benz Unimog as a record-breaking off-road vehicle. Early in 2020, the Unimog achieved ‘king of the hill’ status by reaching an amazing altitude of 6,694 meters or 21,962 feet above sea level. This not only proves the Unimog is a solid off-road vehicle, but it’s literally capable of reaching unfounded heights.

The first Unimog came in 1947 while the first mass-produced model bearing the Mercedes three-pointed star logo first appeared in 1953. The third-gen Series 404 Unimog was the first to be designed as a truck instead of a farm tractor while the truck grew a longer wheelbase starting from 1963. The current U 4000 and U 5000 both have a longer hood and a smaller windshield to mimic the proportions of an SUV. 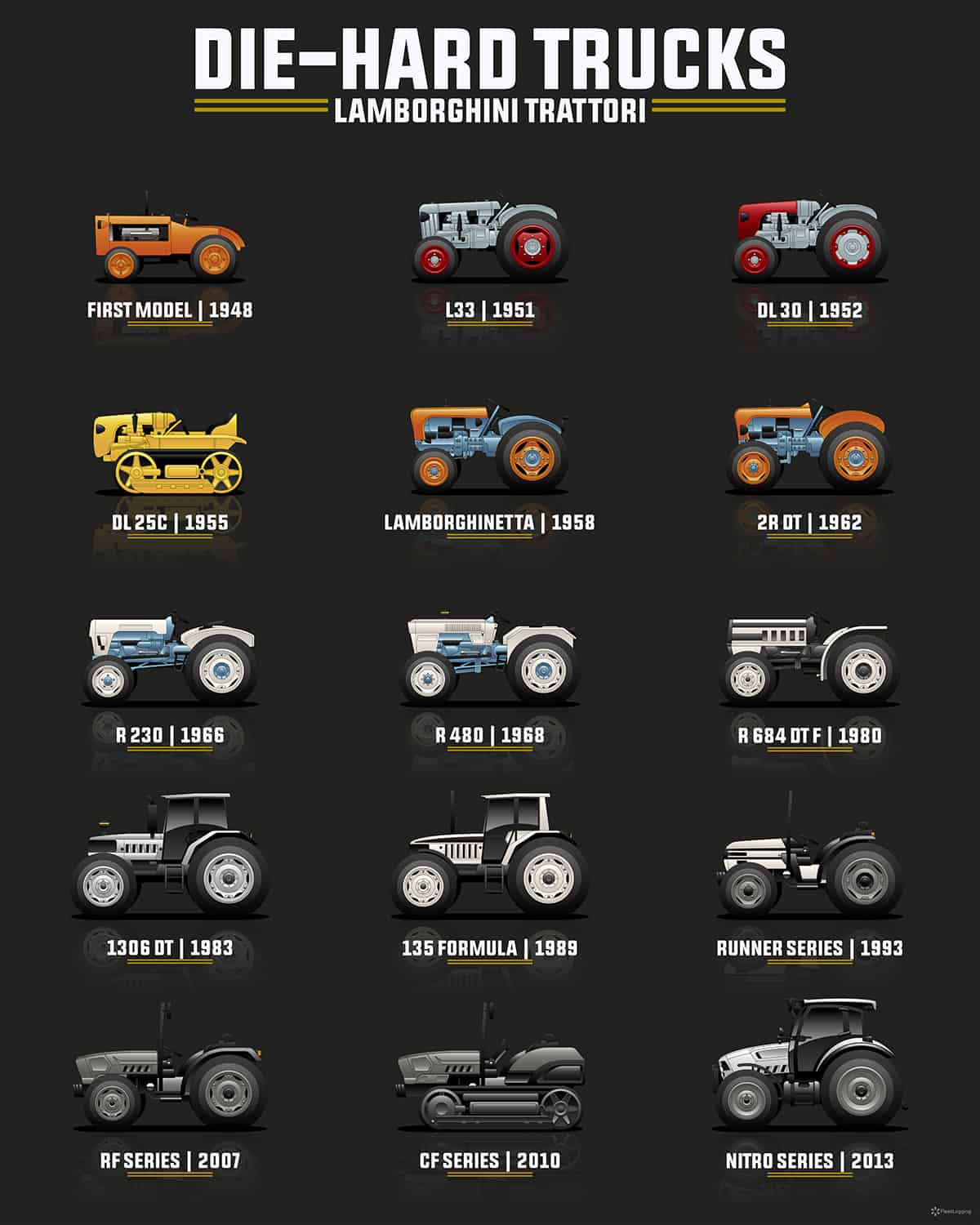 See the evolution of the Lamborghini tractor (Front view)

The Lamborghini brand started life as a tractor and a good one at that. The first Lambo tractor appeared in 1948, and the earliest models were produced from war scraps. Soon enough, Italian-crafted engines started appearing in 1951. The second-model L33 is the first tractor to be made entirely by Lamborghini. From then on, all Italian tractors with the raging bull insignia are proper Lamborghinis from the ground up.

The Lamborghinetta appeared in 1958 and was the first tractor built in Lamborghini’s new manufacturing plant. However, the sixth-model 2R DT is the first Lambo tractor to have a four-wheel drivetrain. From 1983, Lamborghini Tratorri’s newest range of tractors entered the market while a taller cab design was standard in the eleventh model in 1989. The Nitro Series was introduced in 2013 and is the boldest yet from the Italian tractor maker. 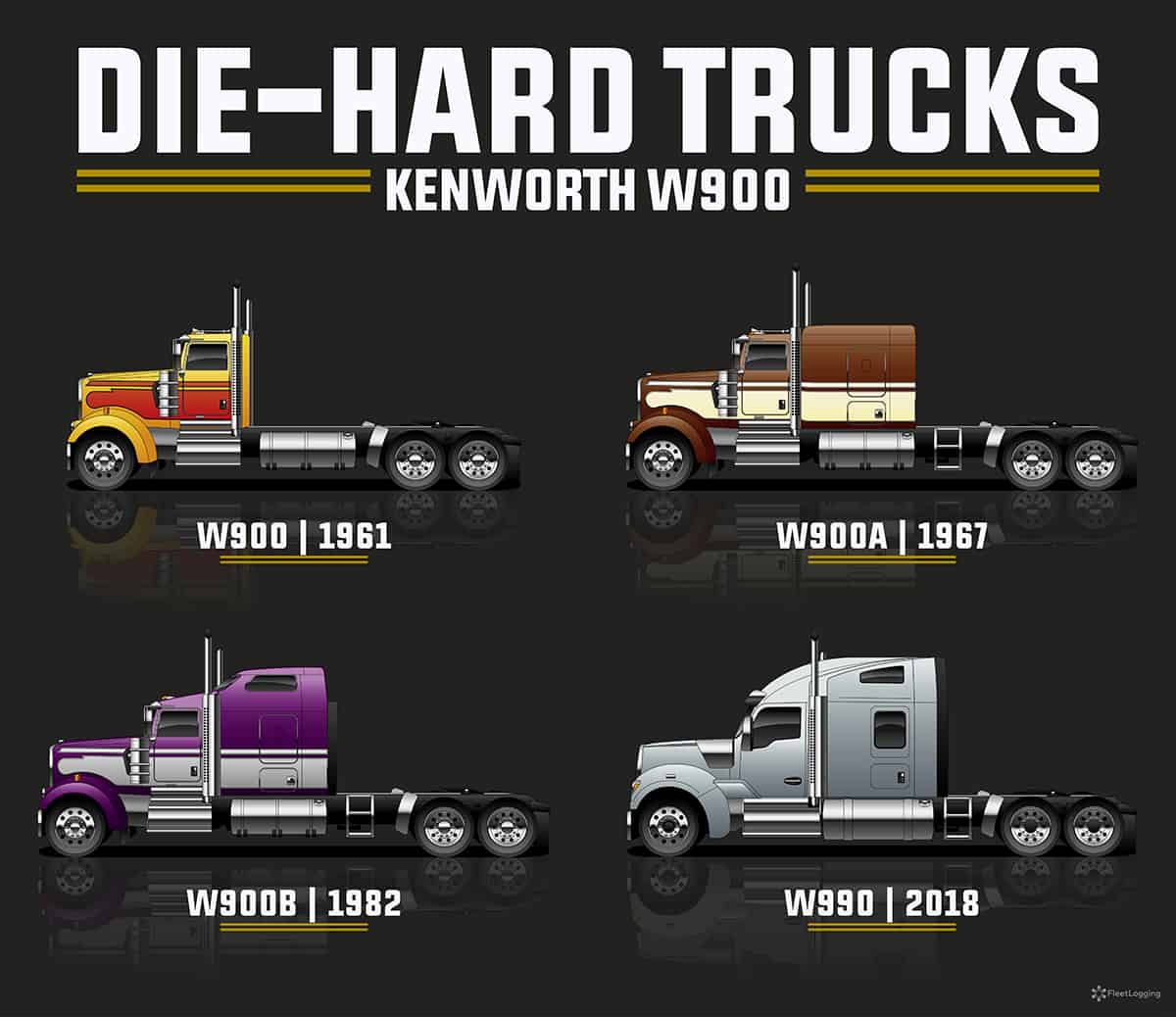 See the evolution of the Kenworth W900 Semi (Front view)

Back in the ‘60s, the Kenworth W900 was the king of the road and proud member of any fleet. It was meant to rule the seemingly endless highways of American interstates while cradling the driver in luxurious comfort. But then, the 1973 oil crisis reared its ugly head, so Kenworth needed something more efficient while retaining Class-8 pulling capabilities. The T600 was born in 1985 and received an enhanced façade in 1990.

Kenworth knows timeless style. So, it’s no surprise that the classic Kenworth W900 has only seen 3 other variations since it was first introduced in 1961. It could be argued that the T600, if not a direct successor, was heavily inspired by the W900B, so we’ve included both classic semi’s for your viewing pleasure. 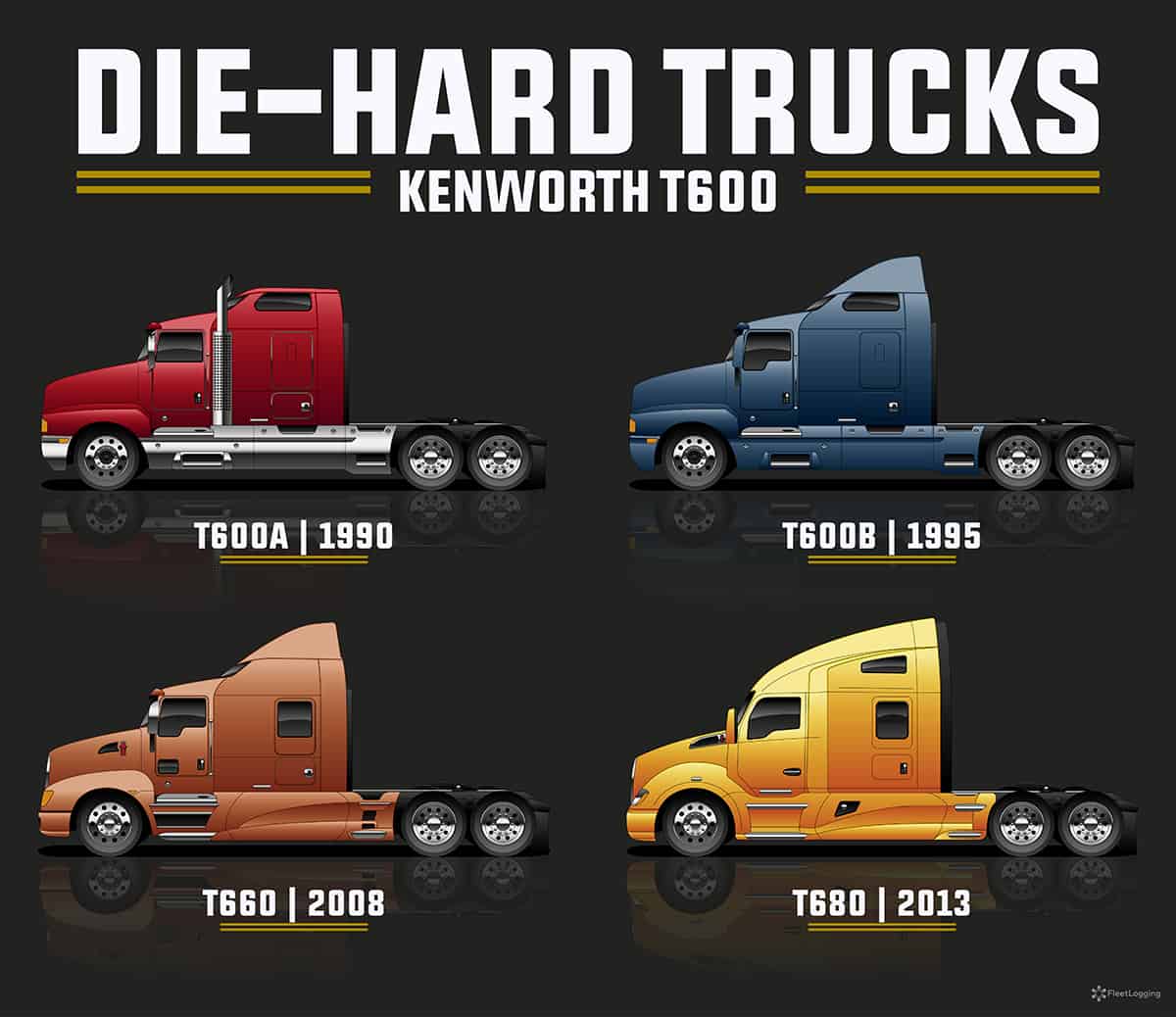 See the evolution of the Kenworth T660 Semi (Front view)

The Kenworth T600 is the first American truck designed for efficiency. In 1994, the T600A gave way to the T600B and grew an Aerocab sleeper integrated into the cab. The third-gen T660 came in 2008 to replace the T600 and came with an aero-enhanced hood and fenders. The current fourth-gen T680 remains one of the sleekest semi-trucks on the road.

As you can see, the sport-utility vehicle, crossover SUV, or minivan you’ve come to know and love has been around longer than you think. And with electrification and alternative propulsion methods looming on the horizon, which radical and innovative design changes are you expecting from your favorite truck brands in the future?

We’ve got our own ideas for radical semi-truck designs, but what about you?