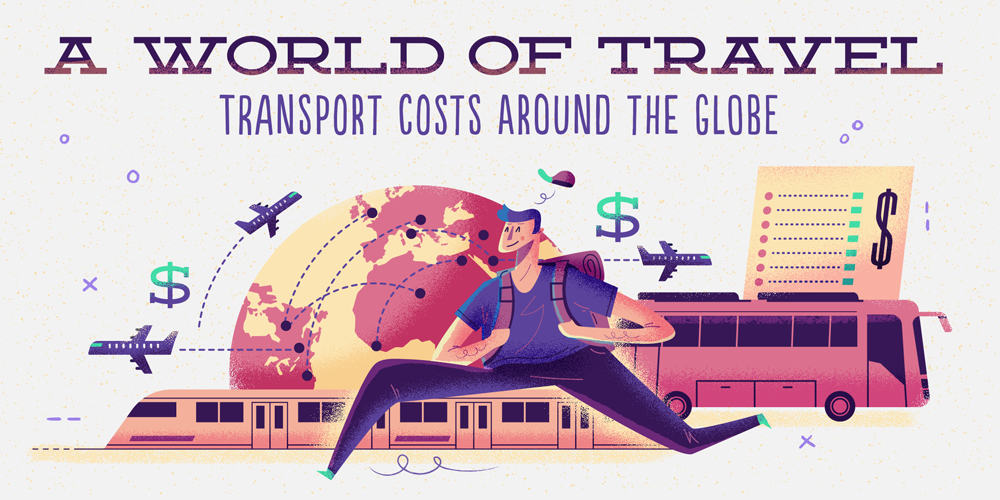 How are you gonna get there?

The cost of plane, train, and bus travel is different in every country in the world. Sometimes switching your mode of transport as you cross the border can mean significant savings for your travel budget. But with language and currency differences to consider, it’s not easy to figure out a price-per-kilometer from one country to the next.

FleetLogging.com wanted to take the pain out of preparing your international journey. We listed every capital city on Earth and calculated the cost of a 100-kilometer bus, train, and plane journey from each travel hub.

The result? Our must-have index for comparing the cost of transport around the world. Scroll on for our guide to the cheapest and most expensive countries to travel by plane, bus, or train.

The Cheapest & Most Expensive Countries to Travel by Plane

Our first infographic reveals the cheapest and priciest place to travel by airplane. Scroll on to see our full data mapped and charted. 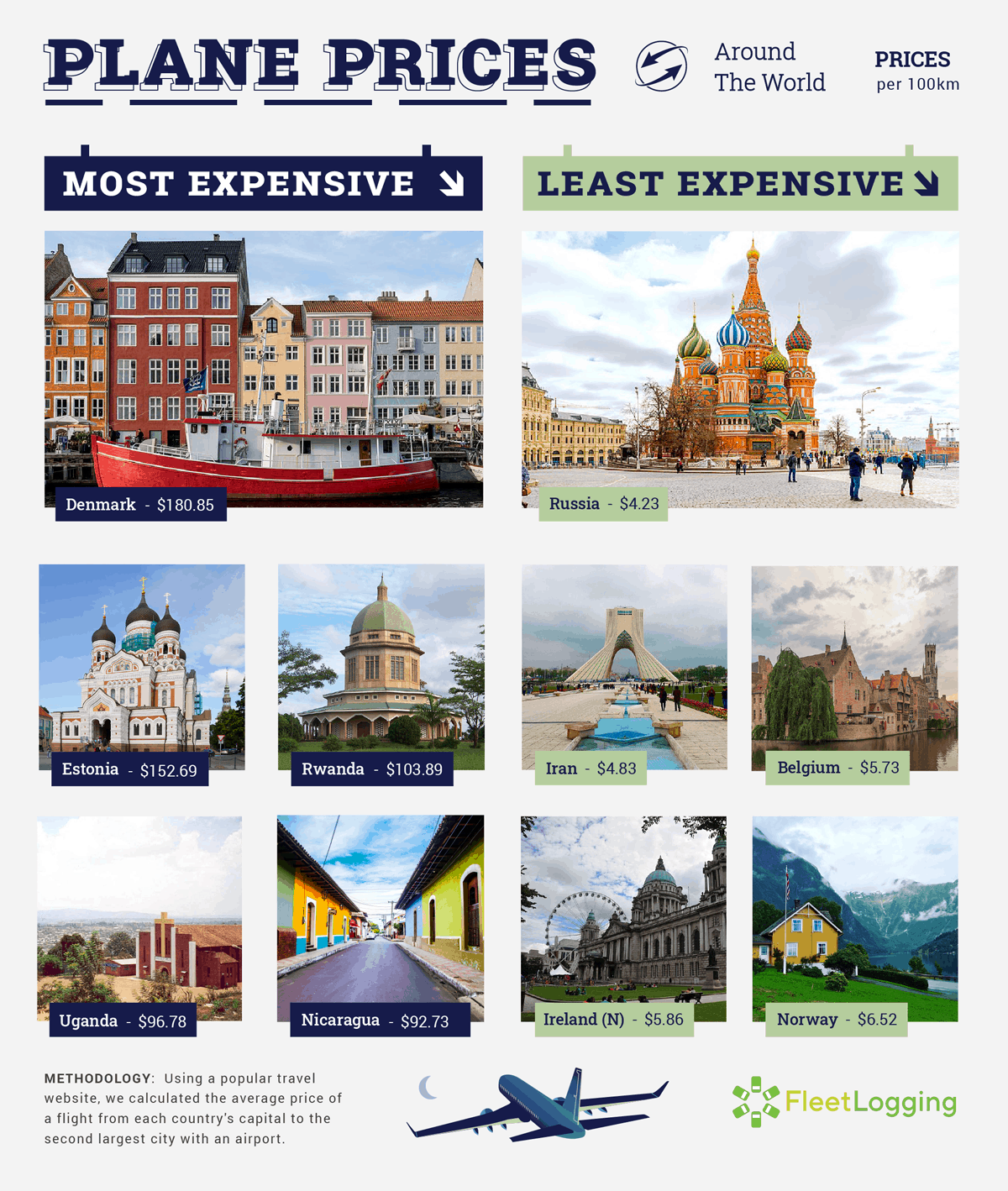 Denmark is the most expensive country to live in the EU, but neighboring, non-EU Norway is more expensive. Still, the cost of a domestic flight in Denmark is the most expensive in the world, while a trip from Norway’s capital of Oslo to Bergen is one of the cheapest. One reason is that the Norwegian route is better served by a range of budget airlines, with Wizz Air, Norwegian, and SAS among those competing for customers.

However, Russian domestic flights are even cheaper. A trip from Moscow to St Petersburg costs around $27 – just $4.23 per 100km. As the heat map below illustrates, other countries in Asia and the Middle East also have affordable domestic flights. Western Europe, South America, and the east of Africa are all costly places for plane travel.

Discover the full list of domestic flight costs below.

We did the same for bus transport. First up is our infographic showing the best and worst country to travel by plane. Underneath, you can find a map and chart with more details. 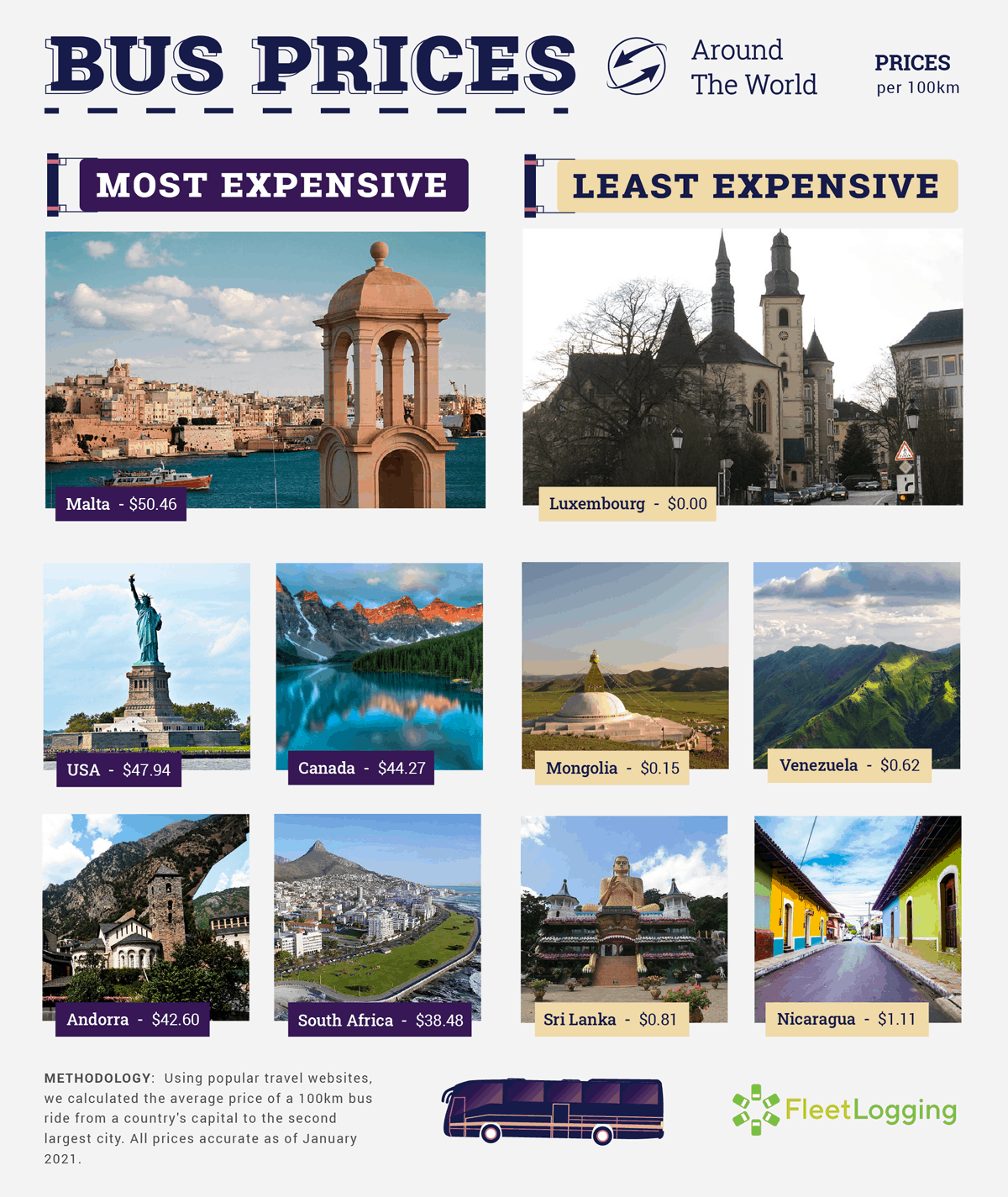 Travelers think of the humble omnibus as a low-budget, flexible way of getting around. But it depends where you are. The USA – the land of the Greyhound bus – is actually the second priciest place on Earth. Our study shows that it can cost more than twice as much to travel by bus (48¢/km) as by plane (22¢/km). That’s based on a bus trip from DC to Hagerstown versus a flight from the capital to Pittsburgh.

You’re not much better off on the bus in Canada, although Malta is priciest of all. You’ll find Luxembourg at the cheap end of the scale for both bus and train travel. That’s because the tiny European country introduced free public transport in 2020.

Africa is the Continent of Cheap Train Travel

Here are Fleetlogging’s findings on the cost of train travel around the world. As before, the infographic summarizes the cheapest and most expensive countries, while you can find full details in the map and chart after the analysis. 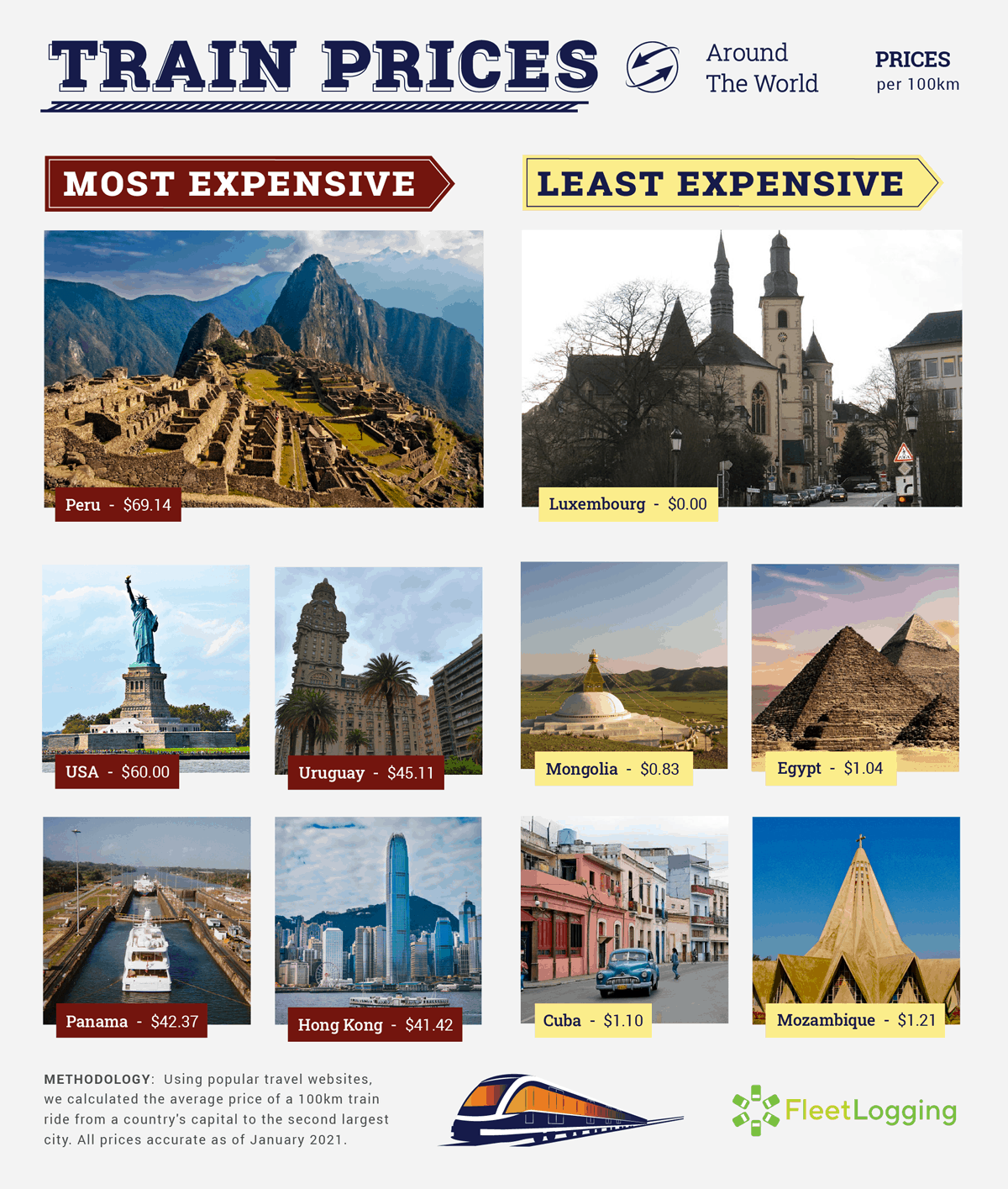 Latin America is beautiful by train. But whether it’s affordable depends on where you are. Peru has the priciest train travel in our study, by quite a gap. A trip from Lima to Huancayo by train covers just 200km at a cost of $139. On the other hand, Cuba, Chile, Costa Rica, and Argentina can be traversed by train for pocket change.

Africa is the cheapest region to get about by train. Even Morocco, the most expensive African nation in our study, only costs 1/7th of the price of a Peruvian rail journey. A significant pattern can be spotted on our heat map of Europe, where train travel gets cheaper the further east you go.

It is possible to find a bargain when sifting through the complex transport infrastructure of foreign countries. But this guide to the cost of different forms of transport around the world provides an at-a-glance idea of what to expect. Weigh up this data against your need for comfort and speed, and your desire to protect the environment, and you’ll have a clearer idea of the best way to go.

All figures are in United States dollars.

As some countries did not actually have all the transport services, we could not collect all three transport costs for every country in the world. Another issue came with the current pandemic. As travel is restricted in most countries, transportation costs varied from day to day.