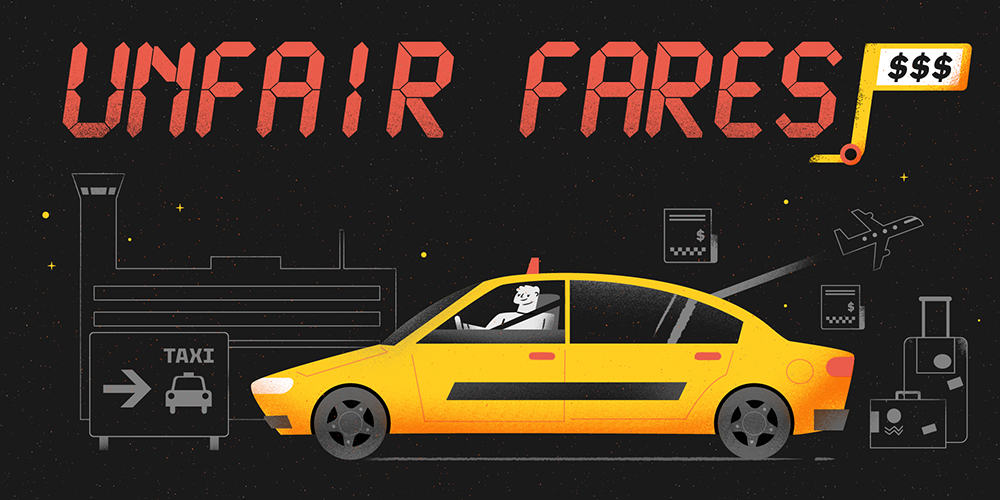 A taxi from the airport: you deserve it. But can you afford it?

After a long plane journey with little personal space, nothing feels more right than the privacy of a taxicab seat to yourself. Unfortunately, local prices (and tourist-minded cab firms) mean that the bus or train is often a more sensible option.

Following our guide to plane, train, and bus pricing around the world, FleetLogging has compiled a list of every international airport by country and then used Rome2Rio and Booking.com Taxis to find the price of a taxi ride to the city center it serves before calculating the price per km for each airport.

Explore the map to find out which are the cities to avoid – and the countries where you can expect to travel to your hotel in style. 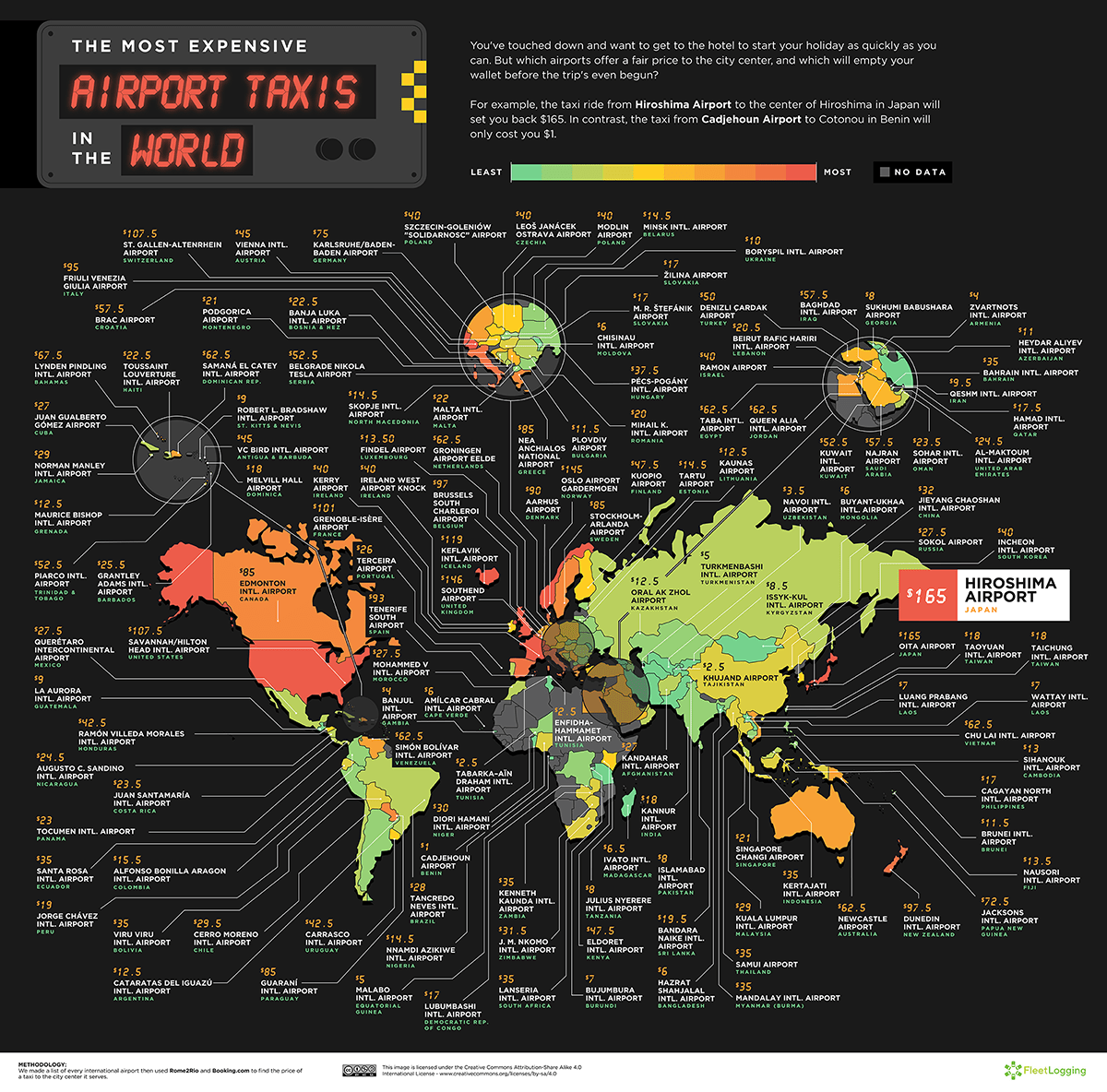 The World’s Cheapest Airport Taxi is in Benin

From our list of the most expensive airport taxis in each country, the world’s cheapest are concentrated in Africa and Central Asia. The zémidjan – meaning “take me quickly” – is an informal Beninese taxi-bike service that may be even cheaper than a cab if you negotiate. 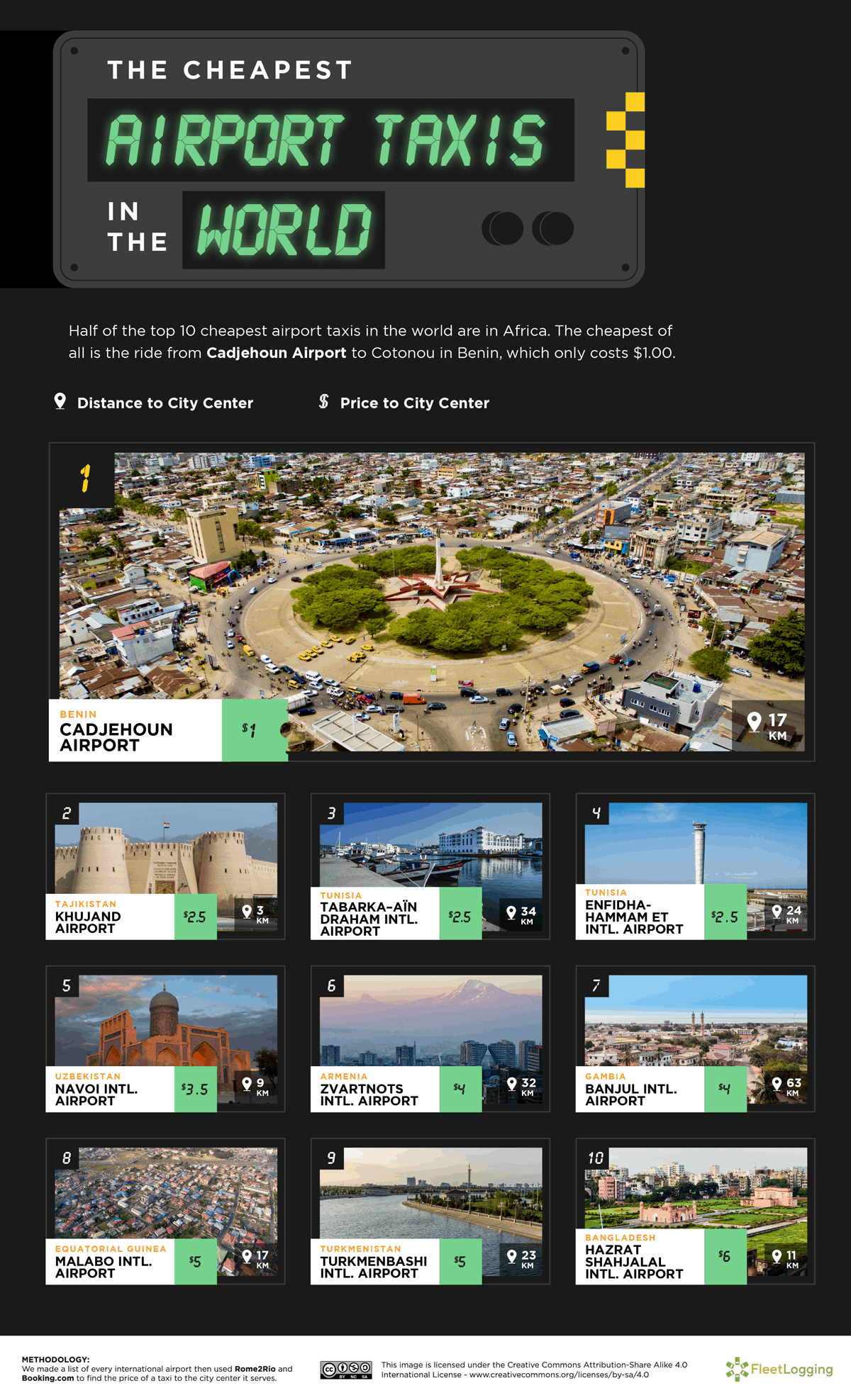 The cheapest airport taxis, regardless of being the country’s most expensive, paint a slightly different picture. Cadjehoun Airport is still the cheapest, but multiple airports in Nicaragua, Colombia, and Egypt make up most of the top 10 (see our table at the foot of this article for the full data).

Taxi drivers in Japan tend to be honest, and an airport taxi may be fixed-price or on the meter. However, that’s where the good news stops because Japanese taxis are also prohibitively expensive. In many places – including Hiroshima – it makes more sense to use the efficient and affordable public transport network. A bus from the airport to Hiroshima Station Shinkansen Gate costs a little over 12 bucks. 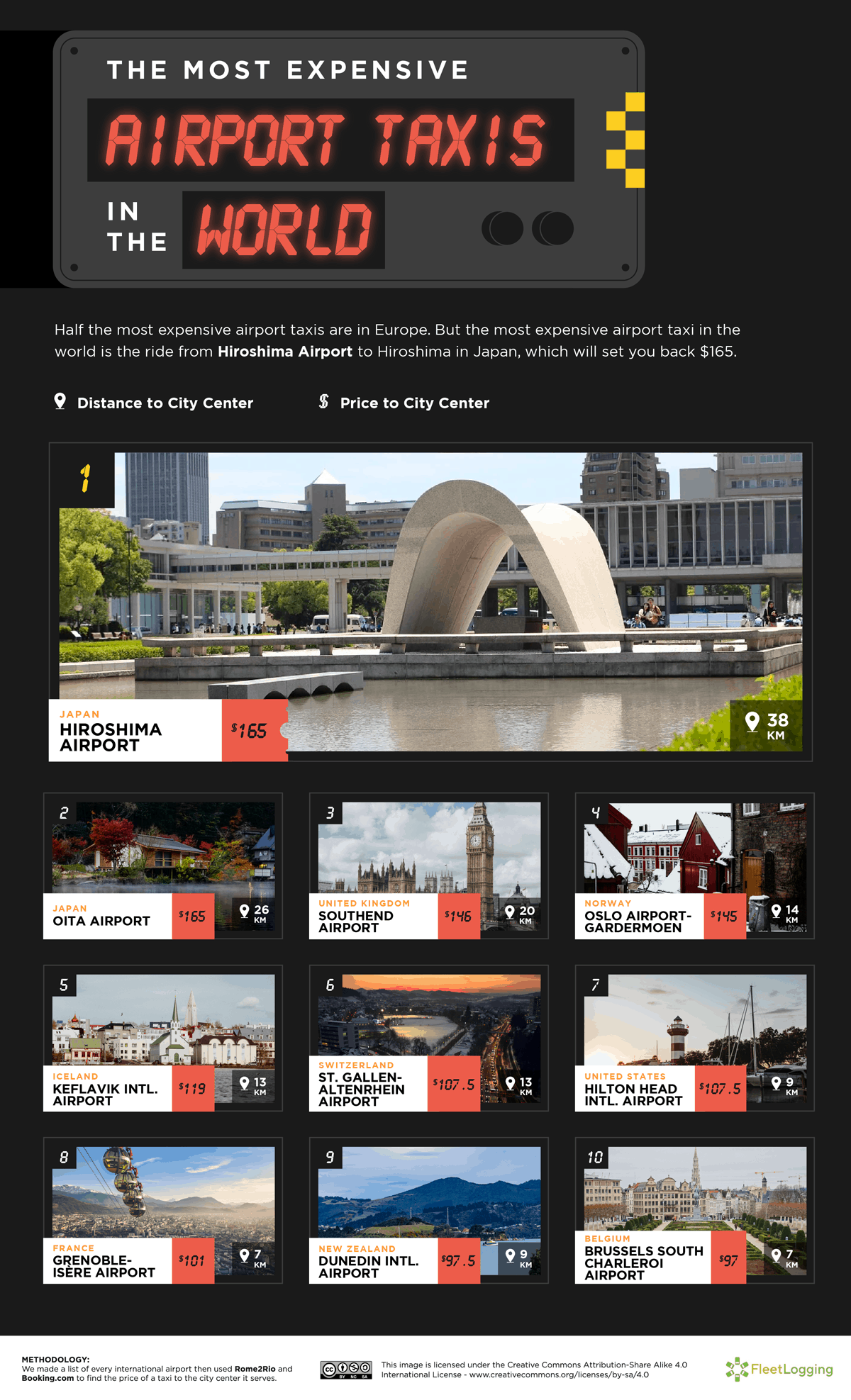 The top 10 most expensive airports are a mixed bunch – Asia, Europe, North America, Oceania – when taken one airport per country. However, when multiple airports are allowed, Japan rules the top 10. The only exceptions are Southend Airport in the UK and Oslo in Norway.

This Norwegian City is Priciest by the Kilometer

The world’s least expensive airport taxis per kilometer are not so different from those ranked by absolute price. Africa, Central Asia, and the Middle East are most represented. 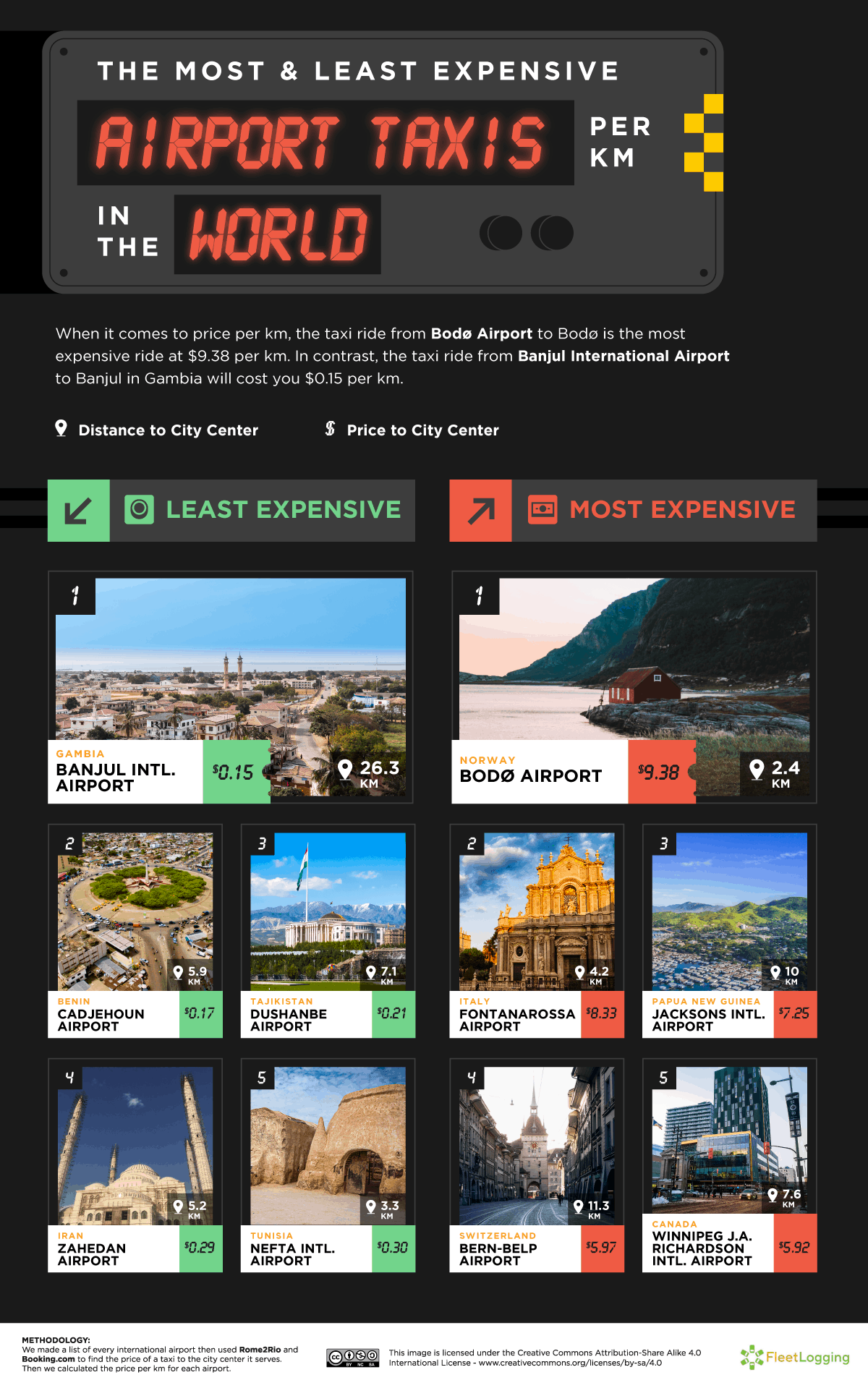 But the most expensive list adds some new villains to the mix. No taxicab in Norway is cheap, but Bodø Airport is priciest by the yard: $9.38 per km. Thankfully, the airport is on the doorstep of the town, so the price to your lodgings should only be around $22.50. Fontanarossa Airport serves Catania in Italy and has the most expensive rate in the country by more than $3. A trip to the heart of the ancient city costs around $35, which is still significantly cheaper than several Italian cities with a lower rate and a longer ride. 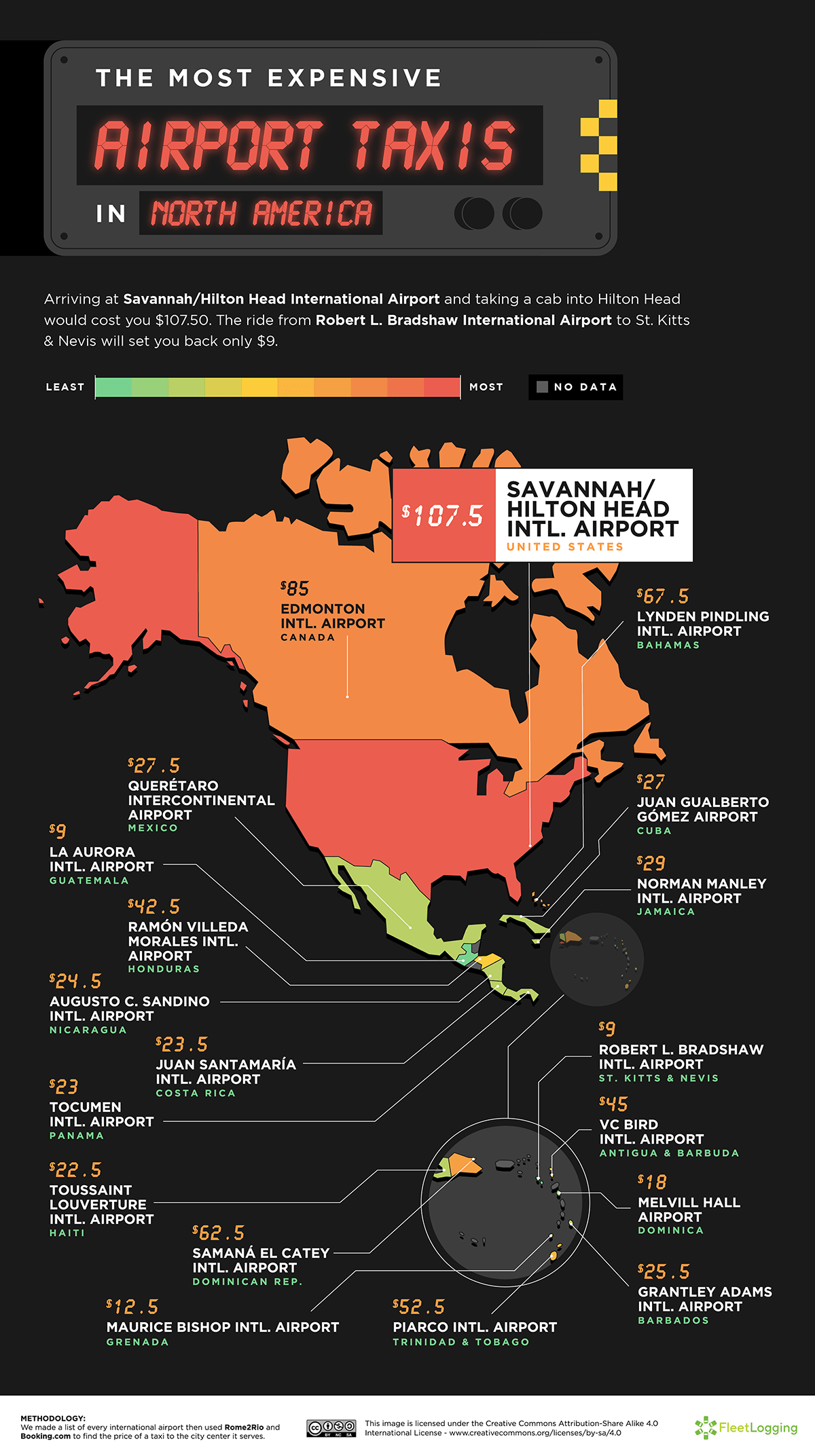 The St. Kitts cab benefits from a short journey and medium rate per kilometer, while Guatemalan cabs are cheap no matter where you want to go. 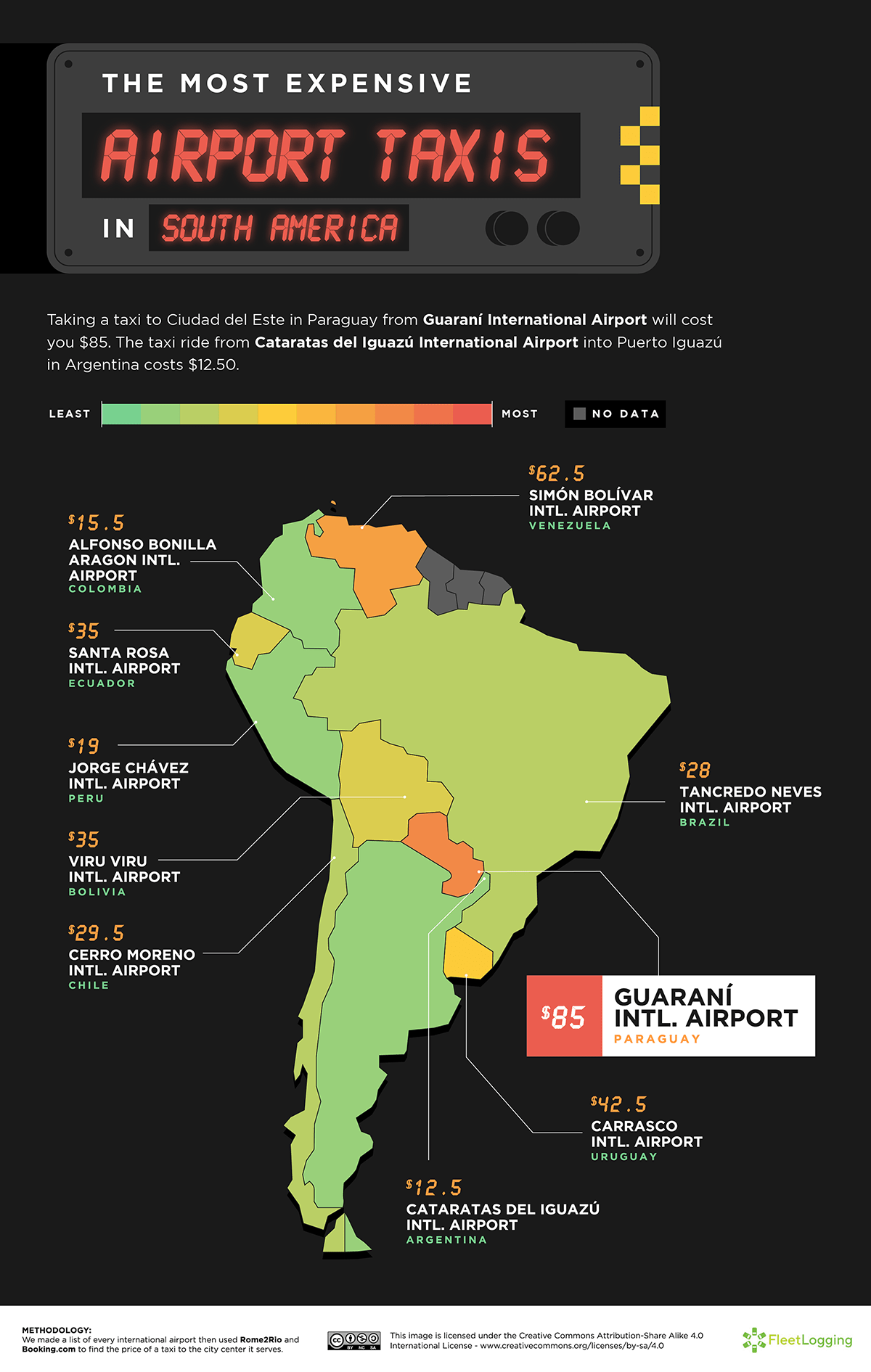 Paraguay’s most expensive airport taxi is one to consider twice: $85 from Guaraní International Airport to Ciudad del Este. A rate of around $3.11/km is moderate, but it’s a 25km journey to the city.

At the other end of the scale, it costs just $12.50 to take a cab from Cataratas del Iguazú International Airport to Puerto Iguazú in Argentina. A bus is also available for a more environmentally sound option. Just be wary of taking unregulated transport – head straight for the official stands at the airport.

Southend Airport is marketed as a London airport, but it’s in another county altogether (Essex) and around 65 congested kilometers from the heart of the city. Thankfully, there is a relatively affordable alternative to Europe’s most expensive airport taxi ($146) to the city – the train is quicker, and prices start at around $20.

Europe’s cheapest airport taxis are at the very eastern edge of the region. Georgia, Moldova, and Armenia each have a cab that costs less than $10. However, you may be able to get a bus for less than a dollar. 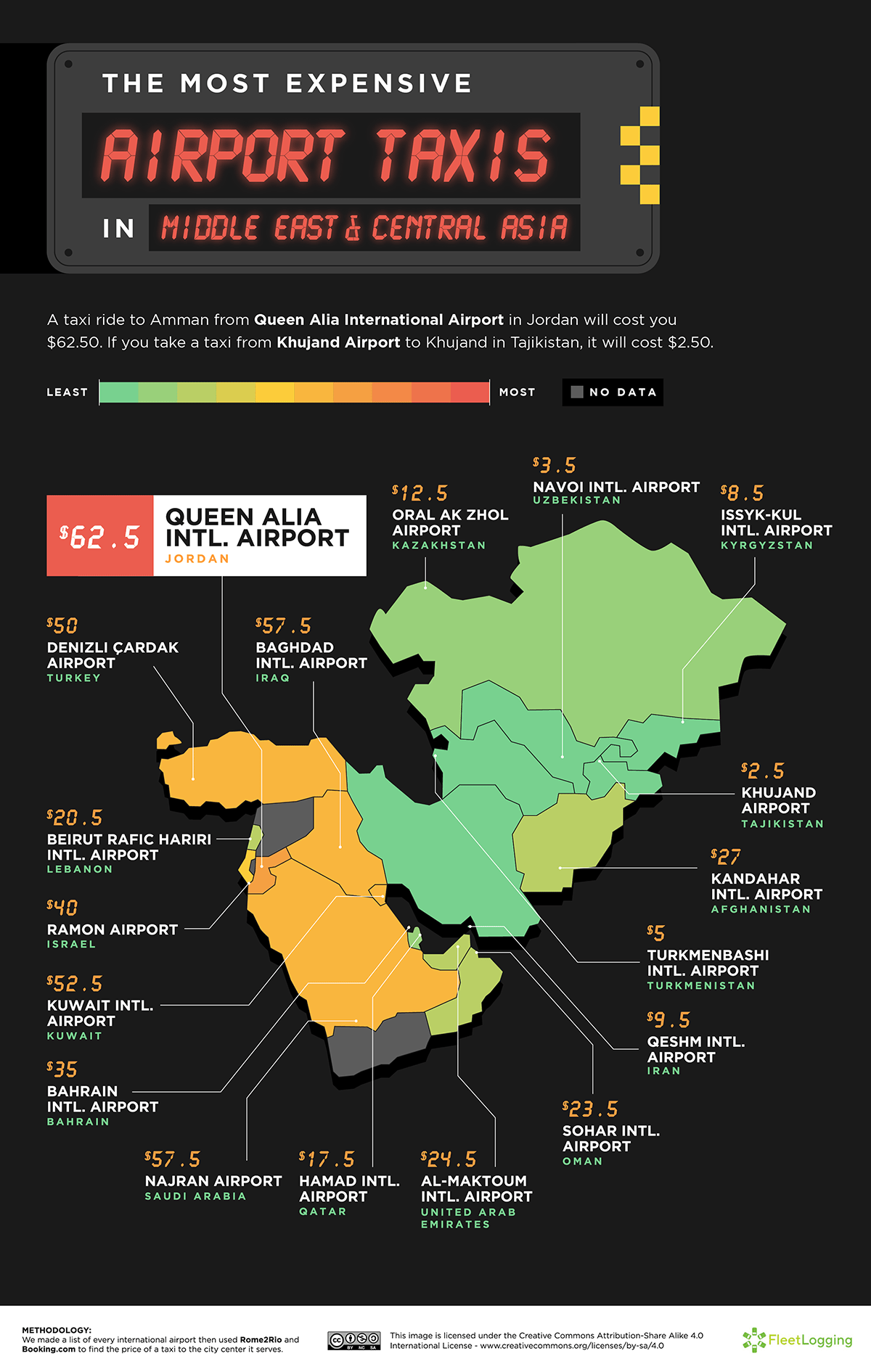 This region is, for the most part, a ‘tale of two Asias,’ with Middle Eastern taxis something of a luxury for the average traveler and Central Asian taxis being among the cheapest on Earth.

There is an exception: Hamad International Airport, serving the capital of the richest country in the world, dispatches taxis to Doha for just $17.50. Plus, you get to see a giant $7m teddy bear in the airport. The standard taxi has a low meter rate, perhaps because wealthier visitors will go the whole hog and pay for a limo. 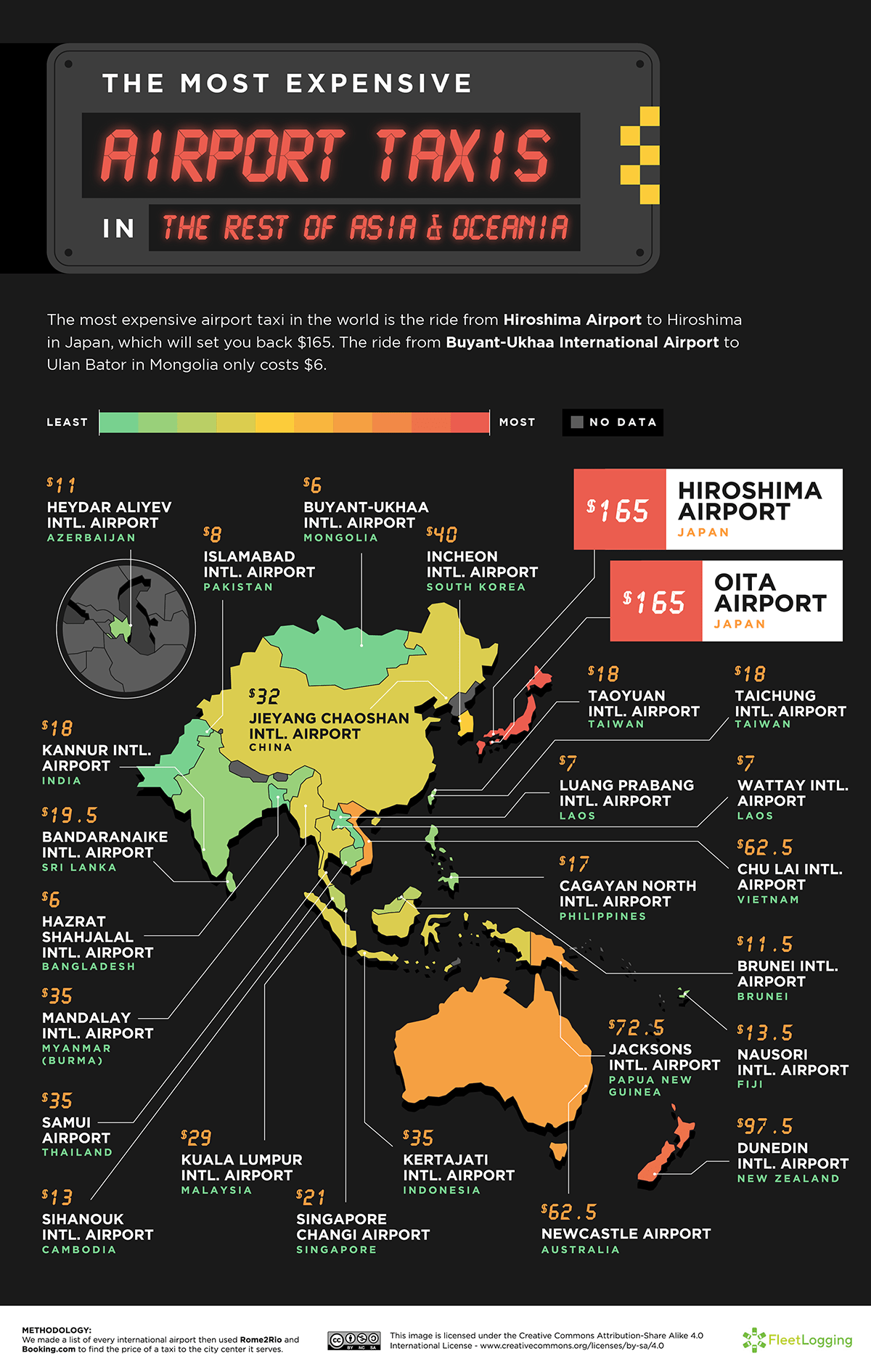 “The Scots were on their way to heaven and when they stopped off in Dunedin, they thought they’d arrived,” boasts Dunedin International Airport’s website, quoting Mark Twain. While the Scottish reputation for being ‘careful’ with money may not be founded on truth, one presumes they didn’t take the airport taxi on arrival.

Outside of Japan, New Zealand has the costliest airport taxi in this region. And, at $97.50 from the airport to the city, it’s a full $25 more than third-placed Jacksons International Airport in Papua New Guinea. By contrast, Pakistan, Laos, Bangladesh, and Mongolia have airport taxis for under $10. 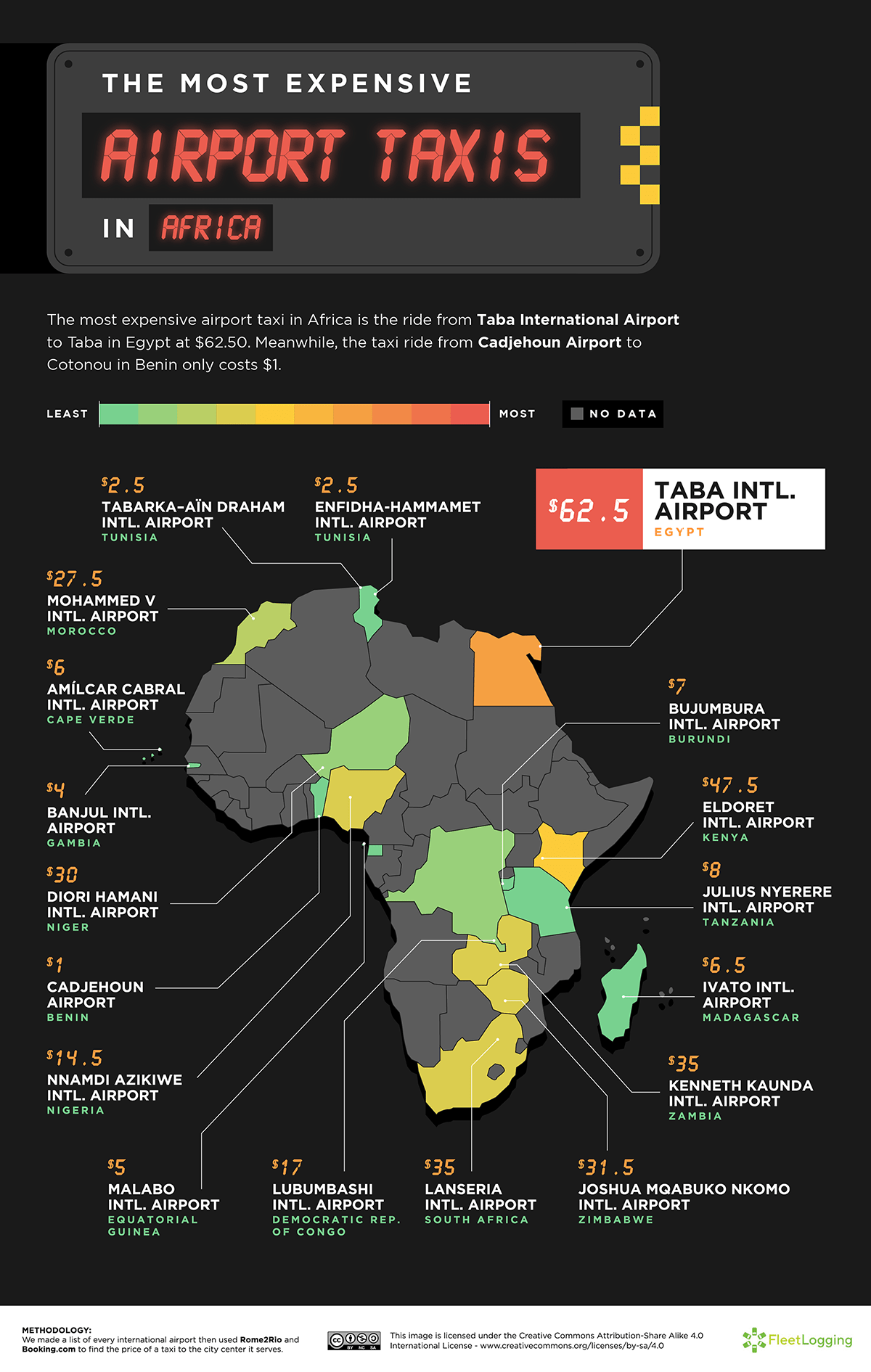 Africa has the world’s cheapest ‘most expensive taxi rides.’ In addition to Cadjehoun Airport mentioned above, the ride from Enfidha-Hammamet International Airport in Tunisia costs just $2.50, and there are airport taxis for under $5 in Equatorial Guinea and Gambia.

Indeed, the priciest ride in half of the African countries in our study is in the single figures, and 16 out of 18 are under 40 bucks. The priciest is the ride from Taba International Airport to Taba. It’s only $1.66 per kilometer, but a distance of around 40km bumps the price up to around $62.50.

Short of parachuting out of the plane, sometimes there is no reasonable option but to take a taxi from the airport.

However, most of the time it is worth weighing up cost vs. comfort vs. duration when traveling from an airport to the town. A taxi may feel like a luxury only until you find yourself stuck in smoggy traffic, the express train overtaking you on the flank.

To find the estimated cost of an airport taxi to your next destination, check out FleetLogging’s full data in the interactive table below.